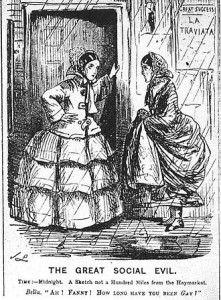 Cartoon from Punch magazine in 1857 illustrating the use of “gay” as a colloquial euphemism for being a prostitute.

Gay is a term that primarily refers to a homosexual person or the trait of being homosexual. The term was originally used to refer to feelings of being “carefree”, “happy”, or “bright and showy”. The term’s use as a reference to homosexuality may date as early as the late 19th century, but its use gradually increased in the 20th century. In modern English, gay has come to be used as an adjective, and as a noun, referring to the people, especially to gay males, and the practices and cultures associated with homosexuality.

By the end of the 20th century, the word gay was recommended by major LGBT groups and style guides to describe people attracted to members of the same sex. At about the same time, a new, pejorative use became prevalent in some parts of the world. In the Anglosphere, this connotation, among younger speakers, has a derisive meaning equivalent to rubbish or stupid (as in “That’s so gay.”). In this use, the word does not mean “homosexual”, so it can be used, for example, to refer to an inanimate object or abstract concept of which one disapproves. This usage can also refer to weakness or unmanliness. When used in these ways, the extent to which it still retains connotations of homosexuality has been debated and harshly criticized.